The Easy Allies Betting Specials are a series of events in which the Allies make predictions and bets about various subjects related to gaming events, with the biggest one of the year, the E3, as the stage for the main Betting Special. After the event has ended, whoever loses these bets would then have to fulfill a punishment previously stated and agreed upon by the contestants. The Betting Specials were initially produced and hosted by Kyle Bosman and Michael Huber.

On April 24, 2020, Kyle departed from Easy Allies citing that he needed to find his life's "main thing." Starting with the PS5 Betting Special, Don Casanova stepped in to take over hosting and producing duties with Huber.

Punished Bet - The losing Allies have to write and perform a Kingdom Hearts monologue taking place in the year 1992 with the title, “Who Am I?”

Punished Bets - Huber has to create and perform two “deleted scenes” from the film, Batman Returns. 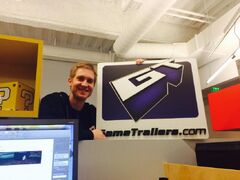 They started as a 1-on-1 competition between Kyle and Huber based on their love for fantasy football and degenerate gambling back at GameTrailers, which they called Final Bets, while the rest of the staff served as team members who would bet on their leader's behalf. The winner of those bets would then claim the Slusser Cup for themselves.[1]

These betting events eventually carried onto the Easy Allies, with the first one held for E3 2016. However, after The Trial of Kyle Bosman, the rest of the Allies became more involved and started betting on their own, each playing as a character inspired by themselves, parodying the WWE Money in the Bank events.

For the next betting event, the majority of the Allies participated for a chance to go against Huber on the next Betting Special, with the winner being Brad. He would later come back as Ultima, with a confident and challenging attitude that would define him for the rest of the events, stating that a new era of Betting Specials was ready to come. His predictions would ultimately come true, as he became the new Champion and claimed the Slusser Cup for himself. Furthermore, his first action as the Champion was to throw the old relic to the trash, taking with him the new Money in the Bank briefcase, ready to cash it in.[2]

The next event would see the introduction of the rest of the cast challenging the new Champion: Cold Blooded, Unrepentant Bosman, Rainy Day Isla, Punished Huber, Benzilla, and Brand Manager. With Damiani as the referee and a new set of rules, Cold Blooded's strategy of being cold and calculating proved to be effective, earning him the right to challenge Ultima for the newly introduced Champion Belt.

Nonetheless, Cold Blooded did not come close to beating the Champion on the next event for E3 2017, and Ultima Brad had started to become an unstoppable force. It was time for the West Division of the Allies - Ben, Isla, Huber, and Damiani - to step in and challenge him. All of them, except for Ben, would end up in a tie, which was then resolved in a match of Mario Party 2's Bowser's Big Blast, which they've been using as a tie-breaker since the GT days, with Isla being the victor. Next came the Coast Division's turn: Kyle, Don, Blood and Jones, with the latter winning with a crushing lead. Finally, the two winners would go against each other in the last event of the year to earn the right to challenge the Champion once more. In a scoreboard that went back and forth, Isla was ultimately declared the new winner.

For E3 2018, it was finally time for Rainy Day Isla to take on the biggest challenge, and claim the belt from the undefeated Champion. In an unexpected turn of events, Rainy Day came up as the winner and brought an end to Ultima's long winning streak once and for all. However, Ultima declared that he had actually grown bored of Betting Specials and their ridiculous rules, going away and back to his original body, presumably never to come back again, while a doubtful Damiani watched from the shadows.

After a year-long break, Betting Specials returned for E3 2019. The previous champion Rainy Day Isla declared E3 didn't matter if Sony wasn't going to attend. With this shift, the format changed to Total Degeneration. The Betting Special utilized Don Bucks as the betting currency instead as each contestant would get an allotment of Don Bucks and be given the odds for a given bet to place wagers. A big bet by Huber gave him the win along with the right and responsibility to come up with a play and corresponding monologues the other Allies had to perform.

Betting Specials would return in 2020 with some changes to the events and the specials themselves. With Kyle's departure from Easy Allies in April 2020, Don took his place as the host. The global pandemic also led to E3 2020 being canceled and individual events being hosted remotely by publishers. Huber and Don iterated up on last year's format with Degeneracy Reborn for the PS5 summer event. They refined the wager system with both Don Bucks and odds remaining in place. Huber and Don would compete against each other and draft teams from the six contestants to try and accrue the most Don Bucks at the end of the betting special. Don won the first draft pick and selected Michael Damiani while Huber chose Ben Moore with the second pick. Teams were finalized and Team Don would pick up the win with a total of 6500 Don Bucks over Team Huber's 6050 Don Bucks. The High Stakes Final Bosman Bet went to Don, as Huber's punishment was to write and perform a "deleted scene" from the film Batman Returns once the Allies return to the Studio.

The next Betting Special was titled Degeneracy X for the Xbox July 2020 Games Showcase. Total winnings for each contestant carried over from the PS5 Betting Special with the same rules being applied. All the contestants would go on to spend all of their Don Bucks on wagers except for Daniel Bloodworth, who decided to keep 300 Don Bucks in the bank. The final results had Team Don coming out on top once again with a total of 8400 Don Bucks over Team Huber's 8150 Don Bucks. Bloodworth's frugality directly led to Team Don's win, with the High Stakes bet forcing Huber to perform a second "deleted scene" from Batman Returns when they're back in the Studio.

The E3 2021 Betting Special would act as the season finale for the 2020-21 season, carrying over the existing teams and winnings from the previous two betting specials. In addition to the odd-based bets, new types of bets were added such as auction bets and free wagers. As an act of good faith, each Ally on both teams were given an additional 2,000 Don Bucks to spend on bets on top of their previous winnings. In order to get the rest of the team more involved in the High Stakes punishment, the losing team has to collaborate in creating and performing a fictional cutscene from an unannounced sequel. Damiani was the individual winner for the E3 2021 Betting Special after saving and betting 4,000 Don Bucks on the last Final Fantasy XVI auction style bet. He outbid Jones, who had only saved 3,100 Don Bucks and previously lost 1,000 Don Bucks betting on an Elder Scrolls VI release date. However, strong performances from both Isla and Ben along with Jones pocketing his remaining Don Bucks gave Team Huber the overall win across the past three Betting Specials. As a result, Team Don had to collectively create and perform a fictional cutscene from an unannounced sequel while Huber had to create and perform two “deleted scenes” from the film Batman Returns to settle all outstanding bet punishments.

Whenever there's a bet that causes controversy, whether for its unclear wording or the deliberation of its results, they would have to be consulted with a special Council formed by all the remaining Allies who are not participating in the aforementioned bet. Their decision is final, and neither the participants nor the audience can dispute their claim.

The rules and format of Betting Specials change almost with every iteration, as a means to adapt to the current event and other surrounding circumstances, or just to try new things and gauge what works best and what doesn't. Furthermore, the bets themselves have become more strict and specific with their wording as to try to avoid the Council getting involved. Still, these events normally follow a basic structure composed of four major segments.

Normal bets that are usually likely to happen but still unpredictable, previously stated by the participants and/or the hosts. During different Betting Specials, they may have different categories within themselves.

Previously known as "Double Down on Don", these are special predictions that usually involve mathematical formulas. Due to their complexity and unpredictability, they normally cost more points than normal bets.

Crazy and unrealistic predictions based on the contestant's wildest dreams, and they score the highest points of all the bets because of this. As the hosts have stated numerous times, there is no honor in an easy and cheap Final Bet win, so the more likely these are, the more they will pressure the participants to add to it for it to qualify.

At the end of each event, the participants have to state the punishment for their challenger when they lose, which have to be accepted by both of them. During Betting Specials with more than one contender, there would be just one punishment directed to every loser, so they would have to be agreed upon by the hosts and/or the whole group beforehand. They usually would have to follow a theme deliberated by the event's winner at the end of the results show.

Community content is available under CC-BY-SA unless otherwise noted.